In the Moog for Music

My favourite band of recent times is Goldfrapp, yet I’m an 80’s child at heart. My favourite 80’s band is Tears for Fears. I had no idea of any link between the two until recently (Will Gregory collaborated on saxophone for Tears For Fears). Will is currently touring with his Moog Ensemble – something of a “Super Band” including the talents of Ade Utley from Portishead and film composer Graham Fitkin. The ensemble recently played in Oxford, I naturally felt compelled to attend.

Moog synths are analog with no presets but plenty of twisty dials and buttons to help sculpt sounds. They are also monophonic meaning you can only play one note at a time. As you can imagine, bringing this together takes skill. We thought it would either be complete genius or total disaster (and were extremely curious to know which).

The varied line-up included a number of classical pieces akin to Wendy Carlos’ Switched on Bach – clearly a source of inspiration.

The highlight of the first half was the rendition of John Carpenter’s Escape from New York, the second half was arguably even better once their own material was introduced.  Firstly there was a sublime piece called Swell. My personal favourites of the evening were the tracks written for the film “The Service of Tim Henman”, both extremely catchy!

Topping off the whole experience was the venue: St John The Evangelist church which allowed sounds to reverberate to great effect creating a wonderfully rich ambience. 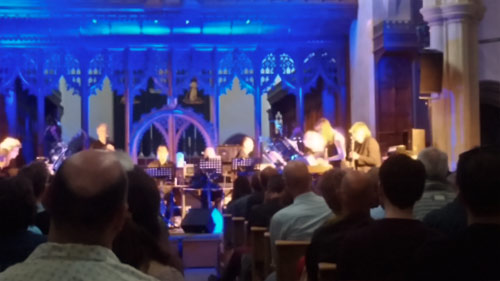 By the end, the audience were applauding for more despite the fact the band hadn’t rehearsed an encore (hey – we were the first place for the tour). All in all I’d recommend this to anyone interested in retro-synths or looking for something a little different from the norm. The current tour ends on 8th July, further information is available on the website.

This entry was posted in Film Composing, Music, Oxford. Bookmark the permalink.